American food is a representation of American culture. Many aspects of this country’s cuisine are rooted in other countries of the world. For example, the all-American hamburger is a tweaked version of the traditional German burger. In essence, American cuisine is a beautiful melting pot of cultures. A recent survey showed that the food that is coming up in the country is Mexican food. 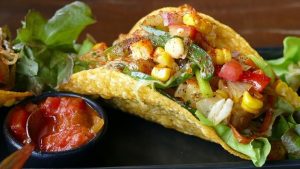 Some people might be wondering how Mexican food became so popular in the United States. Most ethnic foods stay relatively unknown for most of the population, but this slowly changed for Mexican food. Some say the reason this occurred was because many of the ingredients needed for the meals can be homegrown and are readily available. There has been a growing movement amongst Americans to buy local. Buying local also gives a person the opportunity to eat food as fresh as possible. A lot of other ethnic meals contain ingredients that do not grow in the United States, making purchasing the ingredients difficult or too costly.

In essence, Mexican food seems to be one of the easiest foods to integrate into a particular cuisine. More and more Americans are having Mexican food at least a few times in a month. In some households, there is a day called “Taco Tuesday,” and some Mexican festivities are becoming a part of the American experience.

Americans are Adding Their own Touch to Mexican Food

There is no doubt that this type of food is becoming increasingly popular, but American cuisine always makes something its own. Yes, at the moment, the most popular foods from Mexico are tacos, burritos, enchiladas, and even margaritas, but that does not mean that Americans are not adding their own touches.

One obvious change is the way that some people prepare the traditional Mexican nacho. Not many Americans watch a football game without having some nachos on the side, with a few added sprinkles. For example, some cooks out there use Dorito chips instead of regular corn chips. That addition definitely adds a cheesy effect to the dish and makes it unmistakably American.

A large number of Americans love to infuse popular healthful additions in some of the foods they cook. For example, some Americans use the ingredients that are traditional used in chorizo but add fermented tempeh or soybean. This dish is vegetarian and tastes just as good. Others might use something like tofu instead of meat to make their tacos or enchiladas. Some Americans have fused their love for a good tostada with their love for vegetables by simply topping the fried flat-bread with shredded carrots, zucchini slices, or even crumbled cauliflower. They may also add avocado, cheese, beans depending on their preference.

It is clear that Mexican food and American food are being influenced by each other in the country. Most culinary aficionados are usually excited when two cuisines find common ground as it appears to be happening now.